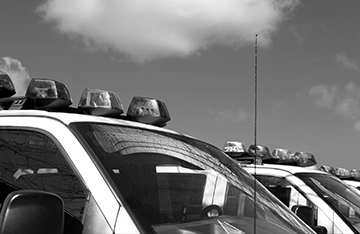 The time when order is maintained and the law is enforced by robo-cops rather than trained patrols is not here yet. However, this does not mean that police units are not deploying useful smart technologies to assist them.  One of the key systems that already play a role in simplifying and streamlining police work today is the Automated License Plate Recognition (ALPR) system. Here are three reasons why this technology is so important to the police.

The eyes are one of the most complex and important human organs. Even though they can receive and instantly process more than ten million pieces of information per second, which would make even many animals jealous of our visual acuity, there are certain activities which human eyes are just not designed for.

The ability to ‘read’ the license plates of passing cars is one of them. In this particular task, the human eye can never compete with specialized cameras. Similarly, the human brain is unable to check all license plates against a database of virtually any size in real-time.

This is precisely the role of an ANPR system featuring dedicated cameras and smart software. A police vehicle equipped with such a system can automatically search for stolen cars, or vehicles without a valid technical inspection certificate or compulsory insurance, while driving in normal traffic. It can also be used to check the validity of an electronic parking ticket or the authorization to enter certain urban areas. Vehicles identified during a robbery can also be immediately added to a database of wanted vehicles.

Vehicle recognition may also be useful for increasing theft clearance rates and imposing fines as well as increasing the safety of police officers. Even before stopping and checking a vehicle, police officers can learn whether the owner of the vehicle is a person who has been prosecuted or who is on a list of people (the “monitoring database”) that the police might be interested in for various reasons. Based on such information, a patrol may react accordingly and with heightened alertness.

The ANPR camera system constantly scans license plates and links them with complementary information such as location, date, and time. In addition to the real-time identification of cars listed in comparison databases, the system creates a rich database of information that police can later use for analysis and investigation in criminal cases.

When dealing with serious crimes such as robberies or murders, investigators often have little to work with during the initial phase of the investigation. A searchable archive of license plates read by motorized patrols at certain times and locations can be extremely useful in such situations, providing them with leads or evidence that they may not have otherwise discovered. Of course, the more police vehicles equipped with the ANPR system, the richer the database of potential leads and evidence.

Having a database of “seen” vehicles is particularly important for criminal investigations since statistics show that up to 70% of serious crimes are somehow related to motor vehicles. This includes car thefts as well as cars used in committing crimes.

Statistics and insurance rates clearly show that most road accidents are caused by careless and irresponsible drivers. An especially risky group are young people, which is why they pay higher insurance premiums in most European countries. However, this category also includes drivers of vehicles without valid compulsory insurance or technical inspection certificates of roadworthiness.

For example, the results of a study from Sweden show that the probability of an accident caused by drivers with no compulsory insurance is up to 34% higher. Uninsured drivers jeopardize road safety and cause major problems, such as damage to property and health, which are not covered by insurance. Other research confirms that the risk of an accident is increased, albeit not significantly, by the poor technical condition of vehicles (e.g., bald tires and deficient brake systems).

ANPR systems can play an important role in identifying careless drivers who fail to comply with their legal obligations. Imagine that any motorized patrol would be able to automatically identify vehicles without valid insurance or a technical inspection certificate of roadworthiness in real-time. All it would take is for the patrol to pass by such a vehicle, be it in a parking lot or on a motorway. How much would the percentage of such vehicles on the road be reduced if the risk of detecting them was so much higher?